“It’s there when we wake up and slips away when we fall asleep, maybe to reappear in our dreams. It’s that feeling we have of being anchored in a body we own and control and perceive the world from within. It’s the feeling of personal identity that stretches across time, from our first memories, via the here and now, to some imagined future. It’s all of these tied into a coherent whole. It’s our sense of self.” (Am I The Same Person I Was Yesterday? New Scientist, 2011, pp 41-42).

“Am I The Same Person I Was Yesterday?” asks the NewScientist in a thought provoking article in the Existential Issue discussing identity.  It is difficult to prove what the self is, where it is, and whether it is valid entity or a mere mirage. The self is described like a ghostly ameba that is everywhere (activating all spots of the brain) but cannot be found or corned in a room. It operates like a magician, “pulling the wool over our eyes,” by giving us the appearance of consistency but in truth, is always changing with our body and mind.

The New Scientist is an international magazine focused on the philosophical and technical implications of science and technology. ‘Am I the Same Person I was Yesterday‘ in the Existential Issue, explores the theme of self and its construction.

Although difficult to pin down, the self can be described as an entity constructed by the brain and processed in three interlocking parts:

The project that follows, tackles the conundrum of the self, the beheld trinity, and calls into question its solidarity in changing times.

Designers research and imitate notable specialists in their field to expand their creative knowledge. This project was intended to develop my skills using a notable specialist as inspiration for my own work. I was asked to create an illustration that speaks in the language of a designer, but ultimately uses my voice.

THE COMPLEXITY OF SIMPLICITY

My design influence for this project was Max Kisman, a notable graphic innovator celebrated for his early computer generated typefaces and illustrations. I thought he would be fond of this article and it would be an interesting subject to try to tackle in his terms.

Max believes that design speaks clearest when simplified. He uses graphic symbolism and iconography to narrate complex issues in the world of politics and technology. Limiting himself to only a few colors and working within a two dimensional box, forces his work to be intentional and integrated. These tight compositions are offset by an iconic, crude style, featuring figures reduced to blocky forms cut out like paper dolls. His illustrations are simple yet dense, playful and poetic, and carefully intertwined compositions balancing opposites with concise precision.

This was an interesting venture for me as Kisman and I have different artistic leanings. Kisman is more direct, limited, and his figures are cruder then mine. My work is more subtle, organic, and my images more visually dense. However, we both enjoy the process of weaving forms, playing with positive and negative space, and view image making like a puzzle, searching for the optimal, most connected composition.

Initial Studies of Kisman. Observing his style. Looking at how to combine and overlap images, exploring the theme of self in the New Scientist article.

Reducing forms to express complex ideas is more difficult than is appears. You can create complex images by manipulating and artfully overlapping visuals, creating a generalized form that describes more than one object visually. However, as forms are reduced, they become less definable and more open to interpretation. It can be difficult to control how an abstract form is seen.

When I showed my initial studies to peers, I discovered that my abstracted forms were often misinterpreted, confused or masked by unintended figures. In the beginning I was told my illustration looked like a hedgehog, later, I was told it looked like a fish with side burns. It was not until I showed my illustration to others that I became aware of some of these secondary distractions.

I found I regularly needed to ask others what they saw to objectively ‘see’ my illustration. In the beginning, I attempted to describe too much in a given image, resulting in at least one subject not being seen and others being compromised. About halfway through my development, I attempted to represent a clock and three heads in one circle, but was unable to find a suitable balance. The clock was never decipherable. I instead decided to depict a pendulum with the figures hands for the concept of time.

It was a struggle deciding which information was most important, what elements needed to be reduced or removed so the entire illustration could read better, while maintaining integrity with my conceptual goals and designer’s aesthetic.

THE THREE STRANDED SELF

Using the voice of notable graphic innovator, Max Kisman, the self formulates as a carefully intertwined balance of opposites. The red presents the calculated, agent mind. The white symbolizes the esoteric. The two come together to form a third body, facing forward. Its face confronts the viewer and challenges the concept of its own reality with one eye open and one eye shut. Its head hovers over the body as the container and categorizer of memories. Below, a pendulum swinging from white hands, questioning the consistency, time, and solidarity of its being. The eye of the self searches without rest, as it occupies everywhere and nowhere in lack of true definition within the form. 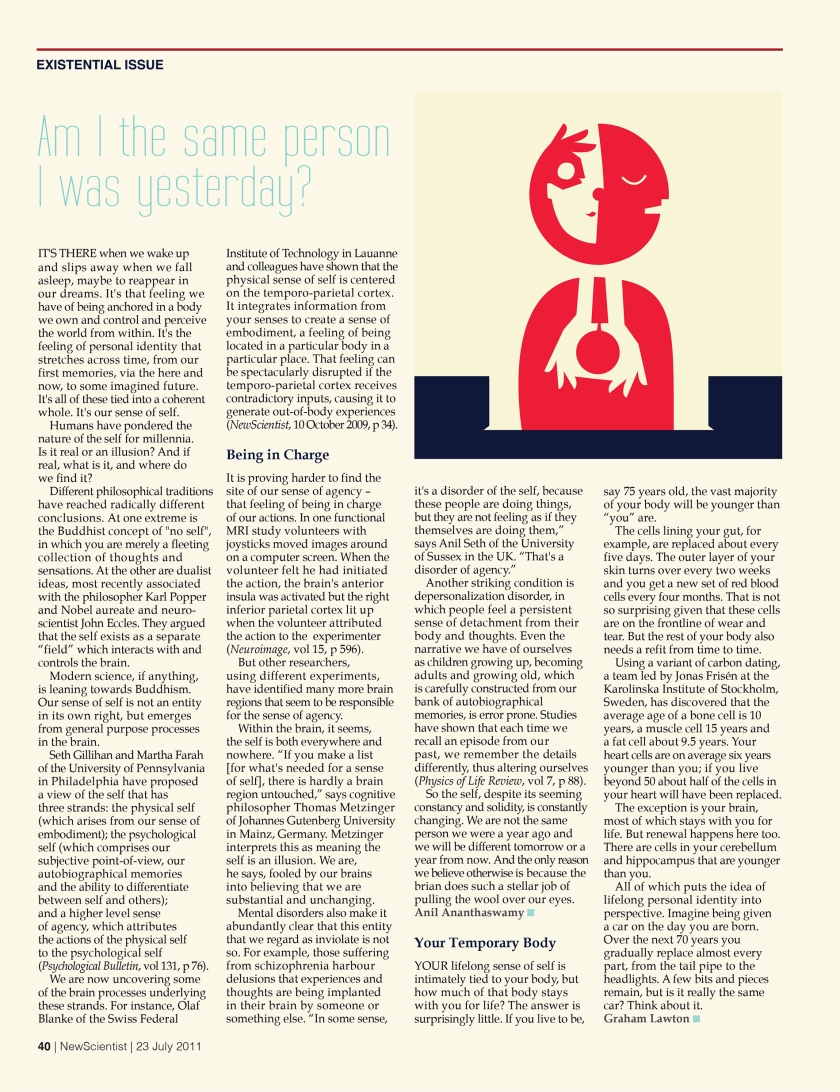 My illustration transformed quite a bit during this process. I feel my ultimate illustration did justice to the article, to Max Kisman’s style, and to my own artistic goals. Although the forms are more rounded than my influencer’s and include a frontal face (which he rarely depicts), my illustration could easily be mistaken as my influencer’s work. The result is thought provoking, playful and inviting. It was a fun exercise to get me out of my box and gave me an opportunity to look at my own self.